Mushrooms are fleshy parts of the fungus which grow above the ground and are commonly used as food. Mushrooms belong to the kingdom fungi and phylum Basidiomycota. They are edible and are of economic importance while some are wild and dangerous to mankind.

The term "mushroom" and its variations may have been derived from the French word mousseron in reference to moss (mousse). Mushrooms are cooked in cruisines across the world. China is the largest  producer of mushrooms in the world. 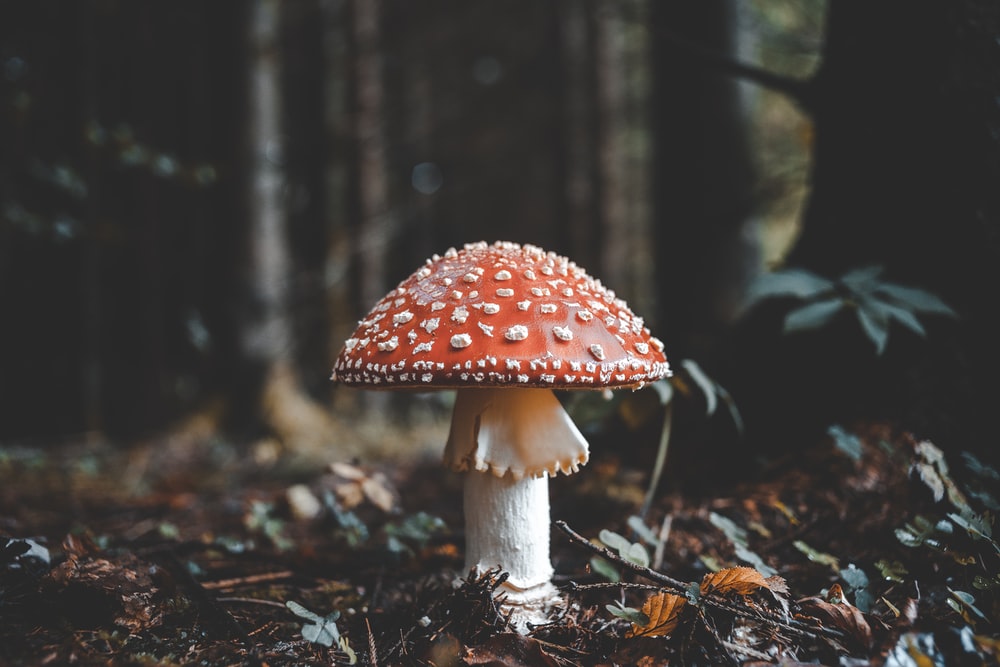 There are so many types of mushroom available , both edible and wild.They come in all sizes.

Some of the most common type of mushrooms are :

Porcini mushrooms are meaty and are similar to portobello mushrooms. They are used in italian cuisine.

Oyster mushrooms are a bit intimidating in shape but are delicious .They are sweet and mild in taste.

Chanterelle mushrooms are yellow in colour and are sweet and peppery in flavour.

Hedgehog mushrooms are spiky in shape similar to that of a hedgehog. They are sweet in taste and are also known as sweet tooth mushroom.

Chicken Of The Woods is scientifically called Laetiporus which means “with bright pores.”

This mushroom grows in clusters on the side of trees and is a beautiful orange color. Normally deep orange in the middle with a lighter orange color around the edges.

Black trumpets are also known as black chanterelles. They are rich and smoky in flavour but not attractive to look at.

The golden teacher magic mushroom strain is a psilocybe cubensis, a species of psychedelic mushroom whose main active elements are psilocybin and psilocin.

They have shiny yellow gold caps giving it a rightful name. They grow in all sizes - small to large. They are loved because they grow great flushes and have profound impact.

The first flush usually gives medium sized mushroom and the latter flush will certainly be bigger and fatter. The caps are about 5cm in diameter.

According to a recent study, 10,000 varieties of mushrooms are found and the mycologist states that many more are to be discovered.The mushrooms have various health benefits, few of them are listed below.

A recent study carried out by a group of scientists states that edible mushrooms suppressed the growth of cancer cells of breast cancer and its reproduction proving it to be chemoprotective against breast cancer.They are rich in antioxidants which helps in fighting cancer.

The anti-cancer compounds act as reactive oxygen species inducer, mitotic kinase inhibitor, anti-mitotic, angiogenesis inhibitor, topoisomerase inhibitor, leading to apoptosis, and eventually checking cancer proliferation. Recently it is found that mushrooms also have anti-tumor properties and can be used in development of medicines to prevent cancer.

Cancer is one of the most deadly diseases in the world and the medicines are not target specific, so the mushrooms can lead to the development of effective and less toxic medicines.

Mushrooms are known to act as chemotherapy and radiotherapy by preventing the side effects of cancer such as nausea , anemia etc. Certain bio active molecules have been identified from mushrooms which include polysaccharides , proteins, alkaloids, volatile oils, tocopherols, phenolics, flavonoids, carotenoids, folates, ascorbic acid enzymes, and organic acids. The active components in mushrooms responsible for conferring anti-cancer potential are lentinan, krestin, hispolon, lectin, calcaelin, illudin S, psilocybin, Hericium polysaccharide A and B (HPA and HPB), ganoderic acid, schizophyllan, laccase, etc.Polysaccharides are the best known compounds with anti- tumor properties.

Mushrooms are rich in proteins and fibers which can aid in weight loss. They can help in increasing the levels of vitamin D which is very essential in our diet. They are low in calories and can help in losing weight.

Mushrooms are rich in anti-inflammatory components, such as polysaccharides, phenolic and indolic compounds, mycosteroids, fatty acids, carotenoids, vitamins, and biometals.Recent study indicates that edible mushrooms can prevent inflammatory infections such as respiratory infections. Inflammations are caused by the immune system in response to the damage caused by physical, chemical or pathogenic factors. So, mushrooms can be termed as super food as it has many nutritional benefits.

A new study found that mushrooms have extremely high levels of two antioxidants which are known for their anti-aging and nutritious benefits.. The research, which was published in Food Chemistry, analyzed the ergothioneine (ERGO) and glutathione (GSH) levels in 13 varieties of mushrooms and found the levels to be exponentially higher than any other vegetable.They also suggested that 3 milligrams of mushrooms should be consumed a day for better benefits.

Mushrooms are rich in calcium which is necessary for the development and strengthening of bones. So, an adequate amount of intake can help in preventing osteoporosis and joint pain. It can also prevent bone degradation and promote bone health.

Mushrooms are also rich in probiotic bacteria which helps in better digestion.

Mushrooms are so nutritious and healthy and can prevent many diseases. They are also known as "super food " because of its nutritious values. We should include mushrooms in our diet and live a healthy life. Also, mushrooms are tasty when cooked properly. We can try various recipes available on the internet to cook delicious yet healthy food.

Proper care must be taken when buying mushrooms because there are various poisonous look alikes which can be dangerous.

How to conquer your mind??🤔

India’s Covid deaths fall to lowest in since last May, over 40 lakh given both vaccine doses

Rheumatoid Arthritis - Cause, symptoms and precautions to be taken.

Green tea and it's benefits